19+ Virtual Reality Executives Whose Names You Should Know

As Virtual Reality continues to mature and develop, more executives are emerging and sharing their VR ideas with the world. VU Dream has compiled a list of the top executives making a mark in the virtual reality ecosystem.

Here are 19 VR executives you should know.

Note: these names are not in any particular order 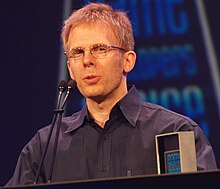 John D. Carmack is an American game programmer and the co-founder of id Software. Carmack was the lead programmer of the id computer games Wolfenstein 3D, Doom, Quake, their sequels and the Commander Keen series of games.

Unfold Stories is a creative content agency specializing in digital storytelling for international development. Our mission is to help purpose-led organizations, businesses and inspiring people tell the story of their work for good at this critical time in history.

SVVR is an annual event bringing together global VR developers, platforms, investors, thought-leaders and hardware across all verticals to collaborate and share in three intensive days of talks, panels, case studies, plus the largest, most diverse expo floor in VR. In an effort to foster continued dialogue throughout the year, the SVVR community runs monthly meetups in Silicon Valley, hosting invited speakers and VR product demonstrations for a community of over 5000 VR professionals.
Sarah Jones, Head of VR
Company: Birmingham School of Media

“I am Head of the Birmingham School of Media at Birmingham City University. My practice and research sits within emerging technologies and the development of immersive experiential films.”

Based in Silicon Valley, Ben has held editorial positions across tech publications for some six years, following the bleeding edge of technology with each step. Ben’s most recent project was the founding of RoadtoVR.com to explore the immense possibilities of virtual reality, augmented reality, and human-computer interaction.
Fredrik Frizell, COO
Company: Here be Dragons

Fredrik has throughout his career been producing high profile digital, content, post, VFX & VR projects. Since 2013 Fredrik has worked extensively with Virtual Reality production and produced some of the most recognized VR projects to date. Fredrik is currently COO & EP at Here Be Dragons (f/k/a Vrse.works) and also serves on the advisory board of Within Inc Within (Former Vrse).
Cathy Hackl, Communications Director, Founder
Company: Future Lighthouse, Latinos in VR/AR,

Cathy Hackl is an Emmy-nominated communicator turned virtual reality & augmented reality speaker and futuristic content creator. She’s the Communications Director for Future Lighthouse, one of the world’s top VR studios that’s creating original and branded VR narrative and fiction. She’s also the founder of Latinos in VR/AR and one of the women leading the virtual revolution. She’s been named by Onalytica as a leading augmented reality influencer and also by NBC News as one of the top Latina women in VR. She’s a pioneer in immersive marketing and is a VR Scout contributor. Hackl has worked for media companies like CNN, ABC News, and Discovery Communications, among others. She loves mixed reality, tech, drones and robots. She’s also part of the Oculus Launchpad class of 2017.

Jenn is a director primarily working in immersive technology and occasionally in traditional media. In 2015, she co-founded Women in Virtual Reality and SH//FT; an organization that highlights female and minority voices in storytelling. She most recently was the Head of Virtual Reality at 1215creative, an LA production company, where she worked on a range of projects from post supervising Vice’s Beyond the Frame: Chasing the Dream series to directing of Bank’s VR Music Experience. Recently named in the top #25 in Onalytic’s 100 Top Individual VR Influencers, she is also a Future of Storytelling Fellow (2016), a featured creator that piloted the Google Jump Start program, as well as one of LA Weekly’s People of 2017. She has also spoken at numerous events ranging from SXSW to Advertising Week in New York.
Tony Parisi, Global Head of VR/AR
Company: Unity Technologies

“Virtual reality pioneer, serial entrepreneur, author and angel investor. I have developed international standards and protocols and started and sold technology companies. I am currently Head of VR and AR at Unity Technologies, where I oversee the company’s strategy for virtual and augmented reality.”
Christine Cattano, Global Head of VR and Executive Producer
Company: Framestore

Christine has been at the forefront of developing and pushing the VR/AR medium forward through content development since the first Oculus Rift shipped over three years ago. Co-founded Framestore’s Virtual Reality Studio in 2014. Charged with leading growth, strategy and production for the studio into the future.
Mat Chacon, CEO
Company: Doghead Simulations

“I move the needle. As CEO of the innovative virtual reality tech start-up, www.DogheadSimulations.com, I steer our ship in the right direction, avoiding the mines that threaten to sink our ship and I rely on the advice of my leadership team to keep us afloat. In only 16 short weeks, I’ve helped our company go from an idea on a napkin to a working virtual reality software tool that helps distributed business teams collaborate in one room, from anywhere in the world, using VR and feel as though they’re all in the same physical location. We’ve already got a working product, partner integrations, customers, revenue, an exceptionally positive reputation and one heck of a great team!”
Julie Smithson, Director of Operations
Company: MetaVRse

“Nothing prepares you for your life, you learn as you go. It is the lessons you learn along the way that shape who you are, and guide you when you respond to the events and interactions you have through the day. With 44 years of Education, I continue to welcome daily lessons of being an Entrepreneur, Mother, Businesswoman, Wife and Woman in Tech, to help myself and those around me.”
Benjamin de Wit, Founder
Company: VR Days

“Bringing together the most creative, sharp and inquisitive minds to drive VR, AR and MR to the next phase. That is my goal. Inspire, share knowledge and create new content. That is what we do at VR Days. And showcase the best VR, AR and MR has to offer. On a creative level, a functional level and a business level. And doing that with great pleasure. Join us from October 25-27 in Amsterdam at VR Days Europe.”
Leen Segers, Co-Founder
Company: LucidWeb & XR Europe

The VRARA is the global association for the Virtual Reality & Augmented Reality industry with local chapters in major cities, connecting leading solution providers with brands and customers. VRARA works with each member company to promote their solutions and services.
Rachel Sibley, VP
Company: Leap Motion

Rachel is a tech exec, dancer/choreographer, and design thinker determined to bring embodiment to tech via VR and AR.
As a VP at Leap Motion, Rachel leads go-to-market efforts to bring natural physical interaction to augmented and virtual reality. Rachel’s background as an award-winning choreographer affords her a unique perspective on the possibilities and perils of embodying this complex new digital world. She speaks and consults internationally on the intersection of tech and social impact.
Rikard Steiber, SVP of Virtual Reality
Company: HTC

Viveport, the app store for Virtual Reality (VR), is a global destination for VR content and experiences. Our mission is to unleash human imagination from the limitations of reality and democratize access to the world’s most diverse selection of immersive experiences, HTC Vive is a first-of-its-kind virtual reality platform designed by HTC and Valve.
Barbara Lippe, Founder & Creative Director
Company: entreZ VR Entertainment

Dubbed “Björk of Virtual Worlds” by the press, Barbara is a video-game-art-director-turned-actor perfectly bridging interactive and dramatic principles for creating compelling VR content. She has always been a visionary, developing video games and virtual worlds in Tokyo and Vienna and coordinating global game industry conferences before finding pleasure in writing for immersive theatre and performing Shakespeare on London’s West End stages and villains in Arthouse movies.
Christopher Crescitelli, Founder
Company: Virtual Reality Festival

The Virtual Reality Festival (VR Fest) is a community based organization dedicated to the development and expansion of virtual reality technology for use by both studio and independent artists and their audiences. Through its live event programs, VR Fest seeks to introduce audiences to the magic and excitement of the virtual reality experience.
Lily Snyder, Co-founder & COO
Company: Doghead Simulations

Neville is CoFounder/CEO of Wevr. Wevr creates award-winning VR experiences and are the developers of Wevr Transport™, an independent network for VR creatives and their audiences. Wevr developed theBlu, Gnomes & Goblins with Jon Favreau and other pioneering titles. Neville read his first book on Virtual Reality in 1991. He started his career as a software engineer on the industry leading 3D animation product Maya at Wavefront Technologies in 1993. He served as a technical director and digital effects supervisor at Digital Domain and Square on projects including Apollo 13, Terminator 2/3D and the animated feature Final Fantasy. He served as Director of Product Management on the ground floor team of Greenplum|EMC, now Pivotal. Neville was a Producer and Senior Development Director at Electronic Arts, where he led technology and production teams since 2004. He graduated Summa Cum Laude from Brandeis University in Computer Science and Cognitive Science in 1992.
Beck Besecker, Founder & CEO
Company: Marxent

The co-founder and CEO of Marxent (marxent.com), the leader in Virtual Reality and Augmented Reality solutions for sales and marketing, Beck is an expert at understanding the players who resist technology and make innovation challenging. Prior to founding Marxent, Beck spent 13 years building interactive marketing solutions for Fortune 500 retailers and brands, including Target Stores and Tesco.
John Riccitiello, CEO
Company: Unity Technologies

Check back on this page frequently for updates and additions.

We’ve seen a tremendous amount of disruptive change coming from the Virtual Reality Industry. It is surely certain that this kind of content will accelerate based on trends in the future.

You most likely have some other VR ideas that can change the world! Share them with us on social media!